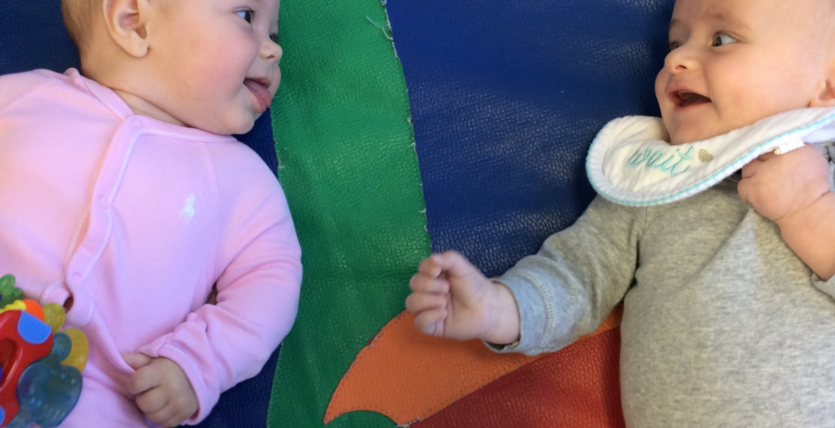 Elaine Rosi Academy realizes that infancy through age two is an important period in a child’s life. The care they receive during this time will have an effect on how they relate to other people, their success, and their enjoyment of learning.

Elaine Rosi Academy follows Creative Curriculum which focuses on the relationship between an individual child and their caregiver and the four areas of development, which are social/emotional, physical, cognitive, and language.

Young children’s  social/emotional development  involves the way they feel about themselves, their understanding of feelings, their ability to regulate emotions and express them appropriately, and their capacity for building relationships with others. Infants learn through their actions and enjoy watching other children and begin to imitate each other. As they gain better control over their emotions, they learn to expand and take on more independence and develop a vocabulary for talking about feelings and about themselves.

Physical development  refers to gradually gaining control over large and small muscles. The development of new motor skills allows young children to make other new discoveries. As they explore, they begin to make sense of their environment. Although infants, toddlers, and two’s develop at different rates, young children will learn to control their bodies in the same progression. Control develops from head to toe and from the center of their bodies out through their arms and legs to their fingers and toes. You can see this general pattern as you watch an infant learn to lift his head and then sit, crawl, walk and run.

Cognitive development  involves the way children think, develop understandings about the world, and use what they learn to reason and solve problems. Infants, toddlers, and twos interact with others and use all of their senses and motor skills actively to construct their own understandings about the people and objects in their environment. Children learn as they play and as they live their every day lives with us and their own families. As they learn more about the world and the objects in it, they begin to categorize new information. As the children’s attention span increases, they are able to persist with more complex problem solving and may investigate the cause when something unexpected happens.

Language development is one of children’s major accomplishments during the first three years of life. They progress from communication needs through facial expressions, gestures, body movements and crying, to communicating through verbal language. They can acquire a vocabulary of thousands of words and learn the rules for using them by being around and interacting with adults, who communicate with them, encourage their efforts to communicate, and guide their exploration and learning.